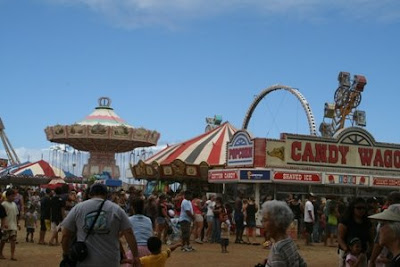 The crowds at the 86th Maui County Fair this weekend grewweekend grew in size and may have spent more money than last year, according to its outgoing Fair Director Sherri Grimes.

Grimes, who finished a three-year commitment to the fair Monday, had predicted a solid turnout and successful four-day event despite the island’s soft economy.

Although she was aware that people were being more budget conscious than ever because of rising gas and food prices, she also was confident that Maui’s record of supporting community events like the County Fair would overcome economic adversities.

“You cannot be living your life every day worrying about the next day,” she said.

Grimes said organizers did everything they could to ensure the community would come to the fair, offering a mix of new features while keeping popular attractions.

“I think it’s a whole lot of everything,” Grimes said about the increase in crowd turnout over one year. Among this year’s crowd draws were the community desire to support nonprofit groups running food booths and the annual exhibits of artwork, orchids and, for the first time this year, robotics.

Fairgoers may have also seen the popular event as their venue for fun since rising air fares are precluding off-island travel. “They’re enjoying things in their backyard,” Grimes suggested.