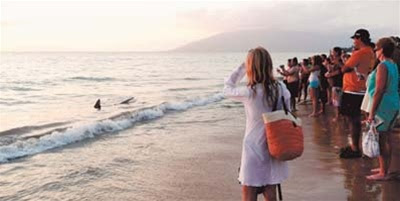 NEWS AND PHOTO FROM MAUI NEWS

KIHEI : A 6- to 8-foot hammerhead shark continued to linger in the near-shore waters along the Kihei coast on Tuesday, raising speculation that the animal is ill or injured.

Two men, who said they observed a hammerhead shark on the shore near Mai-poina-oe-Iau Beach Park on Saturday, said it was injured after apparently biting off more than it could chew.

Jerry Orban, a Denver resident but regular Maui visitor, said he saw the shark rolling on its side in the shore break and grabbed its tail to haul it out.

As he did, he could see it was bleeding; then it suddenly regurgitated a fish head.

A Pukalani man, Leroy Perez, said he and his wife, Melanie, saw the shark’s dorsal fin close to shore as they drove by the beach near the old Kihei Wharf. When they stopped to take a look, he said he saw “a haole guy was already down there . . . already pulling the shark by its tail, bringing it on shore.

“I guess for some reason the shark came inside. He was kind of choking on something, swimming on his side. When the guy pulled him on shore, all of a sudden a big fish head came shooting out of the mouth,” Perez said.