Many of you have already heard about the ridiculously high gas price on Maui. This situation had sparked a conversation on Twitter regarding Maui Bus several weeks ago.  Inspired by that conversation, a good friend of mine, David a.k.a. @raatz, wrote a blog post expressing his point of view on the whole situation.  Below is an excerpt of the post for the A Maui Blog Readers.  Continuation of the post will be found at DailyKos.

My home island of Maui recently had the dubious honor of reaching the price of $6 for a gallon of regular unleaded gasoline this week. Granted, that’s in the remote town of Hana, where prices for everything are high, even by Hawai`i standards. But even in the island’s more urbanized areas we’re close to $5. This picture was taken in Wailuku, Maui, Hawai`i on April 29, 2011: 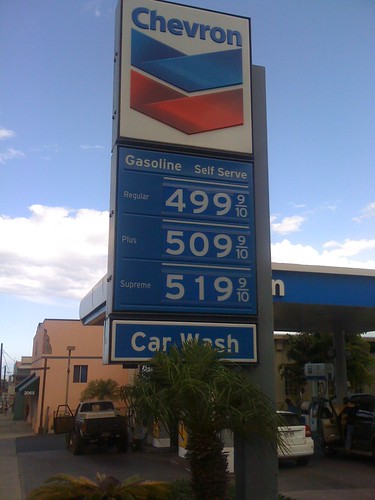 Maui’s nearly 730 square miles include several non-contiguous residential and employment centers. We haven’t had transit infrastructure since the demise of the plantation-railway system, which connected the island’s towns for many years starting in 1879 (though the decade-old Maui Bus system is improving). So, in the most oil-dependent state in the nation, we are a car-dependent island. As a result, working families, already squeezed by Maui’s high cost of living and comparatively low salaries and wages, are suffering. Parents and guardians often work two or three jobs, usually driving solo to each of them. Children need to get to school, practices and rehearsals – usually driven by parents or other family members. Transportation costs have been a topic of conversation almost everywhere I’ve gone the past few weeks. The collective sentiment: We’ve got to do something different.

So, it’s clear that a car-based society on Maui (or anywhere, over the long term) is no longer sustainable. Skyrocketing gas prices force us to recognize that reality. Most of the world already knows this. But oil companies’ influence and our own habits are so ingrained in America that we are reluctant to make necessary changes in our laws, business practices and individual lifestyles. The record-high gas prices – as unfortunate as they are in our daily lives – provide the sense of urgency needed to make long-warranted changes.

The good news is that we got into this situation by choice and, therefore, can get to a better situation by making better decisions. We’ve had many years of federal, state and local laws, programs and subsidies directly or indirectly establishing the car as the preferred (sometimes effectively the only) mode of transportation. Tax laws, zoning codes, personnel practices, business plans and personal habits have all favored transportation by single-passenger vehicle. All of those things can be changed. Continued at Daily Kos