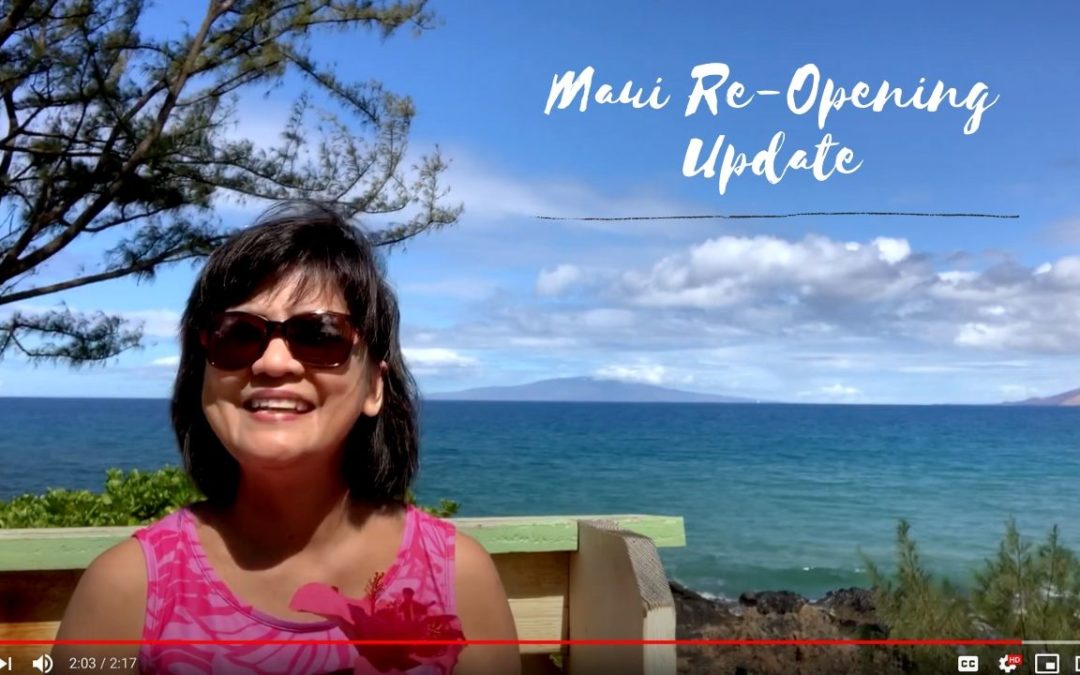 I started writing this blog post when Gov. Ige first announced the re-opening starting August 1 … then as we know another announcement was made pushing the re-opening back to September 1st.  I have to be honest, that change threw me off. I debated wether I should re-write this blog post completely and just talk about the updated version of the announcement, or just post as it with intro.   After a long debate in my head I decided to post as is with the intro (and a little revision) … below are the first announcement and second announcement post:

We heard Governor Ige made the announcement. Starting August 1st, people coming to Maui may avoid the 14 day quarantine if they get tested 72 hours before the arrival and tested negative for Covid19. Details to this announcement needs to be fine tuned. They are working on that right now. There has to be specific instructions on how to implement this.

Concerns About Maui Re-Opening Aug. 1 that made them push it back:

1. Some of the people in the plane can opt to not take the test but just quarantine, there could be spread and contamination during flight if one of some of the passengers who didn’t get tested actually have Covid19 and asymptomatic (will pass the temperature check).

2. There was news that hospitals and clinics administering testings are now overwhelmed due to spikes, therefore some can’t give the results till after 5 or 7 days. That won’t work with the 72 hours requirement.

Maui To Open or Not To Open yet … That is the Question.  There are 2 Camps, maybe 3:

As we all know, there are 2 sides on this … there are two “camps” so to speak:

One camp is angry about how slow Maui is opening and thought the extension of the quarantine period to the end of July was unnecessary. There are people in this camp threatening to sue (and some actually filed a lawsuit). There are people calling the governor and Lt. Governor all sorts of names. This camp thinks that we should have opened sooner. This camp often points out how “low” our Covd19 cases are and how low the deaths are. The people on this camp often accuse the people on the other camp as being “fearful” and dragging the Hawaii economy to the ground. One argument I heard was that they say people can also “die of poverty” or “mental stress” the lock down is causing. Needless to say, the people on this camp are happy to hear that Hawaii is somewhat opening albeit with “testing requirements”.

The other camp are the people who think that we should not open yet, especially with the surge we are seeing. One of the main concerns is overloading our healthcare system. Because Hawaii consists of small islands with limited medical facilities, we really need to be careful not to overburden our hospitals and medical facilities. Sure the people in this camp are aware of the economic suffering due to very high unemployment rates and many local businesses closing because they can’t sustain their biz without tourists on Maui, but the people in this camp feels safety is paramount for now, and we will eventually recover economically later on.

Where do I stand on this? In the middle. And I think there are many of us like this – sp maybe we’re the 3rd camp. I know that’s a “safe answer” and seems like a “copout”, but I truly am torn and I truly see both sides. I often try to put myself in the shoes of the government officials who are responsible for making decisions, it surely puts it in perspective. I am sure they are struggling. How do you balance this situation? You can’t. We have to decide and the decision will lean one way or another to one side. They won’t be able to please everybody. This pandemic is hard on everyone.

When I started this blog post, my goals is to give you a guide on how to “visit Maui during pandemic”. Well, I got carried away with musing on the two sides of the story so I think I just have top have a part 2 of this post. Will do that tomorrow. In the meantime, feel free to comment below and let me know what your thoughts are on “Maui Re-Opening”. Mahalo!

Note #2:  Instead if part 2, I had to quickly record another video about a second announcement which is the push back of re-opening to September 1st

It was very windy that day but I thought I needed to make the video right away so I can share the news right away.  First I went to the place where I recorded the first announcement but t was so windy my trip-pod was being blown away so I had to move to a different location.

Here is the video of the windy beach. I uploaded it on video later, but this was recorded  at the same day I shot the  video above.

The full announcement of the push back of re-opening can be found here.

As I mentioned earlier, this new second announcement threw me off, and there were varied reactions to it.

My thoughts on this Pandemic and Maui:

On Visit Live Love Maui Facebook Page (it’s private so only members can see the posts), I wrote a post which I want to share here with you too:

…. Listen, this pandemic is not “miraculously going away”. We are going to be in this for “a while” (not sure how long but it’s long for us), so let’s deal with it the aloha way, ok? For those of us who live on Maui, let’s be grateful we live here and show grace to the visitors who longs to be here. For those who wants to visit but can’t (or wouldn’t) because of quarantine, please be understanding and patient. It’s not that the locals don’t want you to come here. it’s just that we need to ensure safety of our people and even yours … because if our medical system collapses, you too will be affected. Mahalo for understanding.

Because the previous video was so windy and it’s hard to understand what I was saying, I created another video.  And in this video I also introduce the “Maui In My Heart” campaign. I will share more about the #MauiInMyHeart #VisitorsKokua campaign in a separate blog post, but for now, here’s the updated video:

The big question is, “Is Maui Really Going to re-Open on Sept. 1”? Sadly, I can’t answer that question. I am guessing that sometime mid-August, we will get an update and we’ll know wether Sept. 1st is a go or not.

I will keep you posted. In the meantime, stay cool and live Aloha.