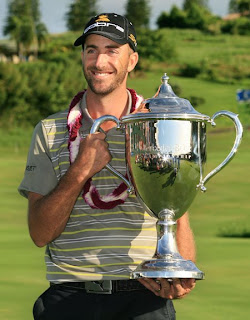 Photo was taken from the Kapalua Golf Course website. Go there for more photos and articles on the Mercedes-Benz Golf Championship.

KAPALUA – His lead down to one and searching for the keys to his new car, Geoff Ogilvy located them in his golf bag.

On the ninth hole Sunday, he found the groove that had earned him a six-shot lead starting the day. With a startling eagle, he cruised to a six-stroke victory over Anthony Kim and Justin Leonard at the Mercedes-Benz Championship at the Kapalua Plantation Course.

With the third-best score and third-largest margin of victory in the event’s 11 years at the Kapalua Plantation Course – a 24-under-par 268 after a 5-under 68 in the final round – those keys to the champion’s 2009 Mercedes-Benz SL550 were in his hands and a $1.12 million first-place check was in the bank.

”I enjoyed the last 2 1/2 hours more than I enjoyed the first two hours today,” Ogilvy said after a back-nine 32. ”Obviously a very rough start. I had never had a six-shot lead before. That’s quite an uncomfortable feeling, really. It was tricky on the front nine and I wasn’t playing horribly.

”I just had a couple loose shots and a couple of putts that I thought were pretty decent and didn’t go in, which is the sort of thing that happens when you’re leading, I guess.”