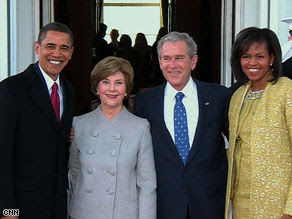 These photos are from CNN.com

It has always been hard for me to talk about politics. I don’t know why. It could be the fact that I grew up in the “martial law era” (Marcos’ regime in the Philippines) and was trained not to speak against the government or I’d go to jail. It could be because I am way too much of a pleaser and I do not want to disappoint any of my friends who is not of the same view as I have about a certain issue or political figure. It seems to me like if I vote someone that my close friends are not voting for, I am betraying them. I know that is not true, but sometimes I feel that way. And so it’s a choice I made not to talk much about politics.

And yet today I am choosing to talk politics. Because today is a historic day – the first African-American president being proclaimed as the 44th President of the United States of America. Congratulations Mr. President, yes, I voted for you.

Voting for Mr. Obama did not come easy for me because of some moral issues that I do not agree with him (like abortion). I have always been a “Republican” by heart. I adhere more to their principles than the principles of the democratic party. But for some reason, this election I could not get my self to vote for Mr. McCain. Not that I do not like him. I highly respect Mr. McCain and if it was not Mr. Obama running against him, I would have voted for him. But choosing between McCain and Obama, I chose Mr. Obama.

There is something about President Obama that gives me hope. Sure I disagree with him about the “abortion issue”. But there are so many other issues to consider – it’s almost like I had to lose a battle to win the war. No one leader is perfect. Even King David was flawed. I just need to continue praying for Mr. Obama on these issues. But the fact that he chose Rick Warren to do the inaugural blessing despite opposition is a sign of hope for me.

What makes President Obama so charismatic? In my opinion, one of his greatest attraction is his love for his family. That was one of my drawing points to him. The big and little things they did together, not just his immediate family but the extended family as well – that speaks something to me. I know that his Toots is so proud of him while she’s smiling at him from heaven. When I read that he is bringing along his mother in law to live with them in the White House (if she wants to) to help take care of their precious girls, that spoke a lot to me. When I read that he wrote a letter to his girls prior to the inauguration, that touched my heart. And what about that bumping of knuckles thingy that he and Michelle did during the campaign? For me, that is such nice glimpse of how fun their marriage is.

And then there’s also his clever use of technology that made me smile. During the campaign, he used Facebook, Twitter, Blogs and all sorts of Social Media Networking to reach the masses. How cool is that! Last night I told my husband excitedly “hey, I found the official blog for the inauguration – they are live blogging it!” Of course my husband didn’t care, but knowing how he feels about my blogging (not a fan), I had to rub it in – LOL!

And so I am looking forward to see what the new White House leadership would do to our country. There is a lot to do. There is a lot to re-build. There is a n enormous task to accomplish. The economic issue alone is huge. But I have hopes, I have high hopes. And that’s good enough for now.