The Whales Are Back! 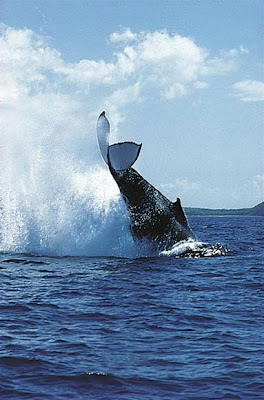 They’re back! The onset of Mauiâ€™s whale season has whale enthusiasts brimming with excitement as new sightings appear on the horizon. The first humpback whale sightings of the season were reported in the four-island region of Maui County. Several vessels reported sighting whales around Lanaâ€˜i and between Lanaâ€˜i and Lahaina during the second week of October.Theyâ€™re back!

â€œI look forward to this time of year every year because we get to see whales,â€ said Naturalist Jeannine Copp. â€œHumpback whales migrate from Alaska to Maui. Itâ€™s amazing they swim all the way here and they donâ€™t eat during the trip or when theyâ€™re here. They divide their lives between their kitchen in Alaska and bedroom in Maui. I try to get my friends from the Mainland to come visit me during whale season because thatâ€™s the best part of being on Maui.â€

According to Pacific Whale Foundation, the humpback whales that come to Hawaiâ€˜i travel a distance of about 2,500 to 3,000 miles from their summer feeding areas near Alaska. While in Hawaiâ€˜i, the whales mate and give birth to calves.

â€œThe whales donâ€™t arrive at once, but rather flow in and out of Hawaiâ€˜iâ€™s waters throughout the winter, often with the greatest number of whale sightings during the months of February and March,â€ said Anne Rillero, communications director at Pacific Whale Foundation.

This post (including the photo) is an excerpt from the article at Maui Weekly. Click here to go to their site for the full article.